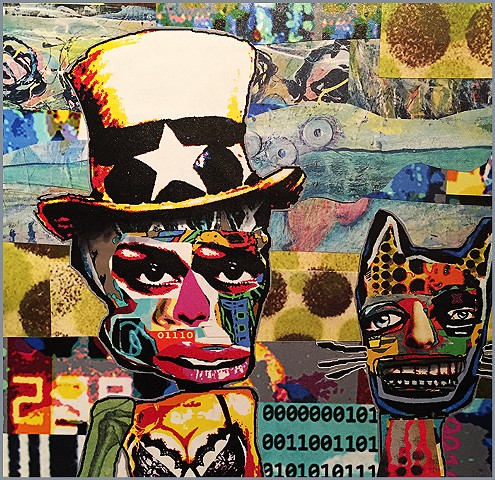 JOEY MARS PRESENTS: AMERICAN ZOMBIE REMIX: PAINTINGS, DRAWINGS AND PRINTS OPENING FRIDAY OCTOBER 28, 2016 6-9pm AT B.XCLUSIVE 336 COMMERCIAL ST. PROVINCETOWN. THROUGH NOVEMBER 15, 2016 As a public feasts on the twisted brains of subliminal sex tape sisters, cereal box celebrities and dance mom divas, "Big Business" is fracking it's way to hell through the sacred lands and life's eternal water supplies. All the while politicians play their parts in the reality TV version of The Theater of the Absurd. No Actor's Guild Union card needed here as Corporate News Networks suck up the free content and blast out the fear and loathing while double dipping with campaign cash for ads. Too many people seem content to let society and the infrastructure rot from with in as they watch the flies swarm from their gated mansions and bullet proof Hummers. The "Company" wants to send in the smart bombs for dummies. Let's kick some ass! It's not my kid with PTSD eating sand and blood. We'll just close some more libraries to pay for those fancy drones playing judge, jury and executioner. It's all good...What time is the game on? Well, the GAME is on.

B.xclusive is hosting a Joey Mars pop-up shop and gallery through the holidays. The first of several installments opens Friday night October 28th from 6-9pm. The Halloween weekend seemed like a great time to showcase some new work from Joey Mars. Along side some new T-shirt and merchandise designs Mars will exhibit a body of work he has been working on for a year or so. Through sampling, distorting, collaging and hand painting, Joey has created many new characters that have been a main stay of his current online project, a daily comic strip called "Cash Money Aliens" The new daily strip is hosted at motherlode.tv , a multimedia portal dedicated to past, present and future of the arts. A continuation of the collage work he has been doing with his mixed media paintings over the past several years. Mars patches various distorted, collected body parts, painted textures and backgrounds to create new, fractal versions representing an evolving cauldron of surreal characters, subject matter and settings. Combining and switching back and forth with computer and physical collage techniques while playing the roll of Dr. Frankenstein as he adds and combines eyes, mouths, arms and ears from other characters to bring these new modern creation to life. The imagery mimics and mirrors some of today's gripping topics such as war, politics, transgender, fashion, beauty, time travel, UFO's, dreams, death and the next dimension. These collages and paintings are presented on wood, paper and canvas. This installment of work will run through November 15, 2016